They said it would be bad. They estimated rainfall amounts no one could wrap their heads around. You could hear the uncertainty of how best to proceed in every news anchor’s voice. Many evacuated. Still others hunkered down.

I remember sitting in my in-law’s kitchen Friday evening with an email in my Inbox about our cancelled flight out on Saturday as my mother-in-law described how, because of the hurricane’s position, we’d be on the “dirty side” of the storm. Apparently you don’t want to be on the east side of a hurricane. She couldn’t have been more right.

By Saturday morning, we were watching footage of cities on the coast being destroyed by the high winds and strong rain from Harvey making landfall. I watched in disbelief unable to connect myself with a disaster like that having never lived through it personally.

But by the end of Saturday our Facebook feed start filling up with friends in Houston posting pictures of flooding in their streets. One of Adam’s high school friends took her kayaks out to float around on her street. Her street had become a river overnight.

One friend start keeping track of the rainfall at their house with a huge water gauge they had to clean out daily. At the time, we could have never guessed the relentless nature of Harvey. Maybe it’s more that one can’t simply grasp something that’s unprecedented. I remember seeing this post on Facebook and thinking this is how we all felt.

All day long, devastation played on our TV. Regularly aired shows were cancelled so anchors could announce safety shelters or neighborhood mandatory evacuations. The mayor of Houston made multiple press briefs never tiring to encourage the city of Houston that help was on its way. The numbers of 911 calls quickly went into the tens of thousands.

And then the world watched in awe as help came from every corner of the country. The “Cajun Navy” drove overnight from Louisiana in trucks with boats in tow. The news reported the NYPD showing up. People we know from Antioch Waco showed up Monday night to help in some of the hardest hit neighbhorhoods.

For Adam and I, we stayed completely safe and dry the whole time. The news showed devastation while our street remained dry. Monday night was the only time I looked at Adam and said, “You need to convince me why our best option is to stay here.” I watched my in-laws start taking family antiques upstairs as the rain water started to lap up over the curb. Adam had been in touch with Antioch Waco as well as others in the city we know who had access to a truck and boat. He had been making a “Just in Case” rescue plan all day. To quiet my thoughts, I packed us a “go bag” in case we needed to leave quickly.

But Tuesday morning we woke up to clearing skies and no rain. By that evening, the sun was shining brightly. I stepped outside the front door to mark the momentous occassion. 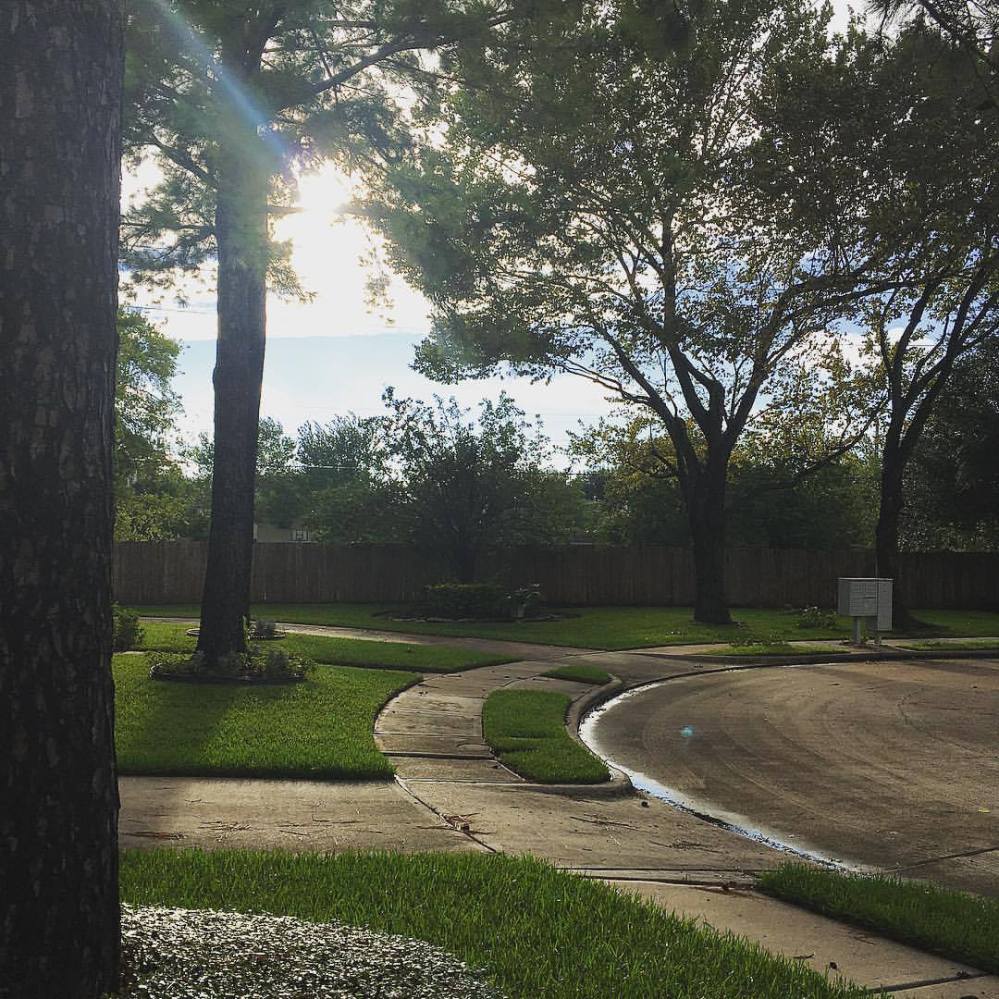 While Adam and I will fly out tomorrow (Friday) afternoon, we leave behind a devastated city in need of rebuilding. The same people who have worked tirelessly to rescue people will now have to restore their homes and lives.

From what I’ve heard from Houston residents, some of the best ways to respond are: